Having a debut novel published must be a nerve-wracking event. Will readers and critics love it? Hate it? Who will they compare you to? Well, Stuart Turton certainly has nothing to worry about, and the writer he has to live up is Agatha Christie (which is, as much as I love her work, a somewhat tired comparison and probably primarily done because Christie and Turton are both British). “The 7 1/2 Deaths of Evelyn Hardcastle” is nothing short of brilliant, a dazzling piece of creative fiction with a few excellent twists thrown in.

Aiden Bishop awakes in a strange house and a strange body, although this first strange morning ends rather soon. When next he wakes, the house looks familiar, but the body is different again. The reader finds himself as confused as the struggling Aiden, both desperate and curious to figure out what is going on. In bits and pieces, the other occupants of the house are introduced, and soon the reader shares the main characters curious ability to observe a scene both from within and without. Apparently, there is a murder to be solved, complete with a deadline. As if that doesn’t add enough pressure, there is also a conspiracy, and a menacing figure in the form of a deadly footman. Who are Aiden’s foes, and is there anyone he can consider an ally? The suspense never lets up as Turton skillfully unravels the mystery thread by thread and throws in a wonderful surprise at the very end. This is the kind of book the term “page-turner” was invented for!

Seems a bit skimpy on detail? If you really must know more, enough reviews have been written about this novel, but most of them contain, in my opinion, a spoiler so obvious, they may as well spell out the conclusion. As this is my top pick for Book of the Year at this point, I am unwilling to give away too much and ruin the fun for you. The only thing I did not like about “The 7 1/2 Deaths” was that the publisher asked readers not to post reviews too soon (I read the ARC in April)!

If you love a good mystery, do yourself a favor and get this novel.

“The 7 1/2 Deaths of Evelyn Hardcastle” is published by Sourcebooks Landmark. I received an ARC via Netgalley in exchange for a review. All opinions are most definitely my own. 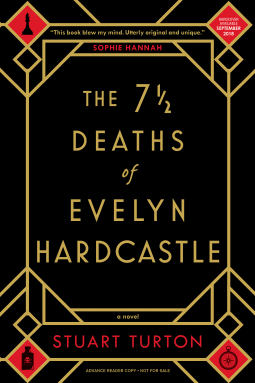